Bird stewards ensure beachgoers are aware of fragile nesting areas and educate visitors about the remarkable species that rely on Florida’s coastal habitats for survival. Rooftop stewards monitor buildings where chicks are falling from unprotected rooftop edges and rain gutters and return them safely to the rooftop. They work with property owners to “chick proof” rooftops by installing chick fencing to reduce risks to hatchlings. (See Page 16 of FSA Monitoring Data at Work Report).

EAI participates in shorebird research and has contributed data to allow these reports to be generated. 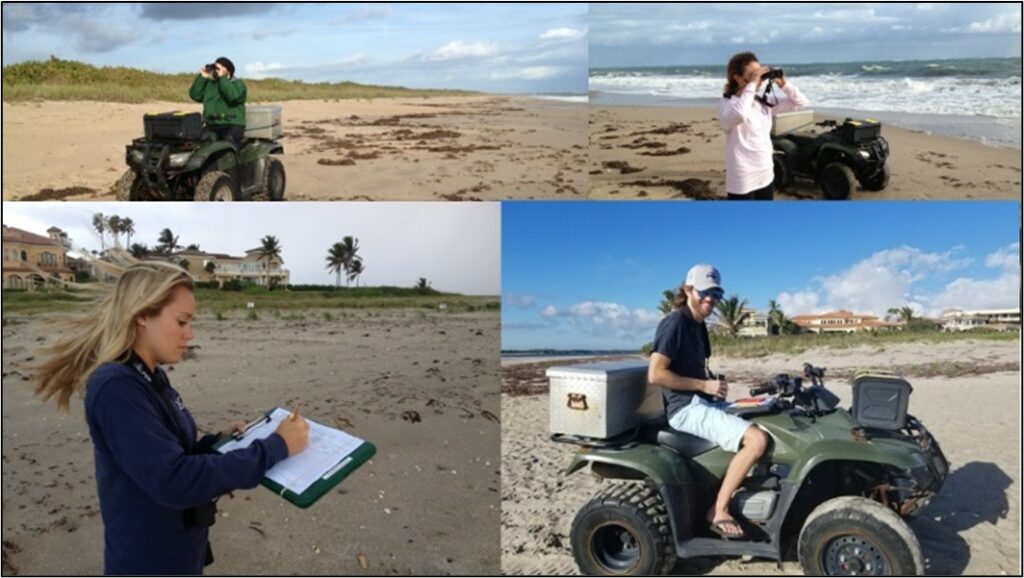 As part of permit required monitoring for coastal construction projects, EAI monitors for protected shorebirds like piping plovers (Charadrius melodus). Piping plovers are common winter residents and migrants in Florida but do not nest here. The piping plover’s main threat is habitat loss from development on beaches, which has reduced the amount of suitable wintering land available. The Florida Fish and Wildlife Conservation Commission (“FWC”) states:

The piping plover is protected by the U.S. Migratory Bird Treaty Act. It is also protected as a Threatened species by the Federal Endangered Species Act and as a Federally-designated Threatened species by Florida’s Endangered and Threatened Species Rule. Piping plovers are protected in Florida through management of wintering grounds.  Frequent disturbance of these migrants has been shown to reduce their survival rates, so wintering areas used by piping plovers may be posted with signs to protect them from disturbance. (See FWC website).

For those interested in aiding in the conservation of Florida shorebirds and seabirds, the Florida Shorebird Alliance (“FSA”) is conducting its 15th Annual 2023 Winter Shorebird Survey from February 3rd – 9th in 2023 to gather data to “better understand the winter distribution of shorebirds and seabirds in Florida.”  (See the FSA website for information on how to get involved). EAI will again be participating in these surveys by monitoring beaches in Indian River, St. Lucie, and Martin Counties.